On the afternoon of December 16th, the “14th Five-Year Plan” blueprint briefing hosted by the Foreign Affairs Office of the People’s Government of Guangdong Province (GDFAO) was held in Guangzhou. Around 85 consular officials from 53 Consulates in Guangzhou (including 29 consuls general), and media representatives from 5 foreign media attended the briefing. 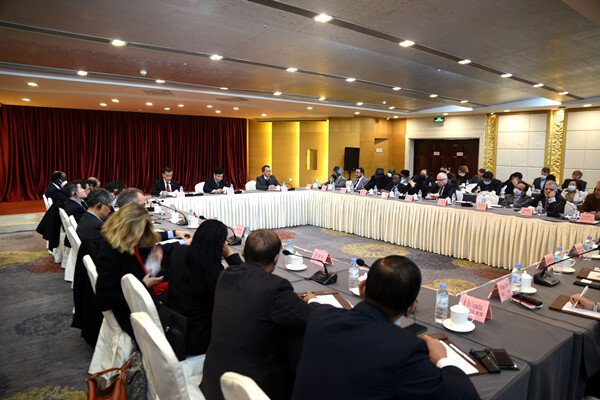 The meeting focused on introducing the spirit of the Fifth Plenary Session of the 19th Central Committee of the Communist Party of China(CPC), and shared Guangdong’s development direction and prospects for cooperation during the upcoming 14th Five-Year Plan period (2021-2025) (14th FYP). The briefing offers Consulates a window into better understanding China’s future development and the relationship between China and the world in the new era.

Chen Qiuyan, Director-General of GDFAO, introduced the 12th Plenary Session of the 12th Committee of the CPC Guangdong Provincial Committee. He said that the 14th FYP period is also critical for Guangdong Province to achieve its goal in being “a forerunner of the country in the four aspects of: economic restructuring; scientific innovation; opening-up and better governance”.

Luo Jun, Deputy Director-General of GDFAO highlighted the purpose of the briefing, “The briefing helps consular officials to have a preliminary understanding of China’s five-year and even longer-term development direction. It focuses on opening-up of Guangdong and sharing development opportunities with the world, thereby enhancing the international understanding of Guangdong’s new development phase and the desire and confidence to cooperate with Guangdong.”

In addition, this year, GDFAO assisted Renhua, a county in Shaoguan to stably increase income and get rid of poverty through high-quality agricultural products and other poverty alleviation projects. This year, Renhua County has had a bumper harvest of Danxia oranges. At the end of the briefing, GDFAO also shared the oranges with all attendees.

Guangdong to coordinate with Hong Kong and Macao on cooperation zones

The aerial video of the Guangdong-Macao In-depth Cooperation Zone in Hengqin is coming!